Lady Gaga may have a few bruises to show for the fan participation part of her concert on Thursday night.

The pop star invited a fan onstage at her Las Vegas residency show and it ended with him falling on top of her as they tumbled off the stage together, shocking the crowd.

The excited concertgoer picked up the “Shallow” singer, who wrapped her legs around his waist. He then did a few small hops before falling right off the stage at Park Theater at Park MGM.

Gaga can be seen falling on her back with the fan landing on top of her in videos shot from multiple angles by fans at the show. A fan picked up gaga and fell off the stage tonight 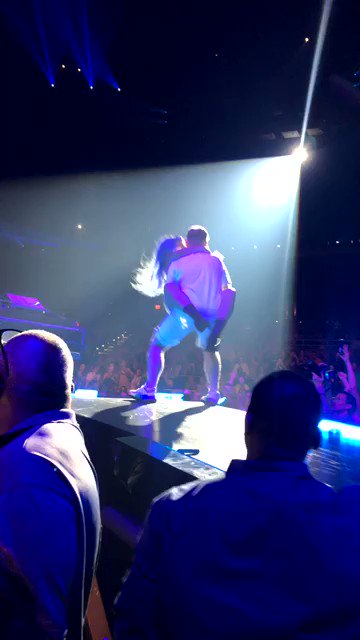 It was nothing the “Born This Way” singer couldn’t handle, as thankfully she and the fan appeared to avoid any serious injuries.

Gaga got back on her feet and kept on dancing right through to the end of her “Enigma” show.

She also had a sense of humor about it, bringing the fan back onstage and joking about the tumble.
“We fell into each other’s arms,” she said in a video shot by fans. “We’re like Rose and Jack in the Titanic.”

Gaga also had fun with it after the show, posting an Instagram photo of herself in an ice bath.

It was no biggie for a pop superstar who has had her fair share of stage mishaps.

“I’ve fallen off a stage before,” she said during the show. “I’ve actually stage dived. It was like a run and then I just stopped leaping and just dropped.”

Sat Oct 19 , 2019
J.P. Morgan Chase CEO Jamie Dimon is not bullish on the future of Facebook’s libra cryptocurrency. “It was a neat idea that’ll never happen,” Dimon said Friday at a conference in Washington, D.C. Dimon’s comments come as a raft of corporate partners have dropped out of the libra crypto project. He added that his […]

Will Boris Johnson’s Brexit Deal Pass? All Eyes Are On Extraordinary Saturday Vote